We are all born to be butterflies. To dry our iridescent wings in the sun and fly toward the light. We were made to sip nectar from fragrant blooms and be the brightest and prettiest ones in the air. 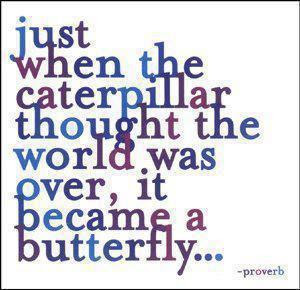 The caterpillar self is hungry taking in more and more until it is stuffed with a glut of information and ideas. It builds itself a cocoon in which to ponder the ideas and digest the information. It begins to dissolve, losing its form and it's structure. It turns into a soup of chaos in which it is unrecognisable as anything at all, just as well it built a shell in which to trap itself. It remains immobile, a chrysalis of potential.

Then within the liquid mess of what was, new thoughts begin to form about a future self. Thoughts about a wonderful self, a beautiful, free self who can fly and live out its dreams. These thoughts are called imaginal cells. But the self rejects the new thoughts as crazy. Self doubt creeps in and because these cells are so different from the caterpillar's cells the immune system thinks they are enemies and destroys them.

Then the conflict begins. New imaginal cells continue to appear. More and more get destroyed in waves of low self esteem or lack of courage, but from somewhere deep inside, the caterpillar's desire to become something more than it is creates more and more of the little thoughts of positivity and ideas of potential. Then the imaginal cells begin to survive as the immune system cannot consume them up quick enough. Self belief overrides.

Then the process takes off. The isolated imaginal cells join together with others. The tiny ideas begin to form bigger ideas that resonate at the same frequency. Information gets passed along at a greater rate creating strings of cells all vibrating and dancing together as one. Soon coherent new parts of the self form and then a moment of realisation happens. The complete string of imaginal cells becomes aware that is on the edge of the birth of a new self. It has awakened to its true nature. I AM a butterfly says the caterpillar to itself and it knows it, feels it to its core.

The butterfly now understands what it has become and all the parts of the soup work together in creating its new form. The imaginal cells don't have to do the work of holding the vision. The mind and body work as one, every single individual cell in unison. The multi-celled organism becomes its beautiful self, ready to emerge back into the world, transformed and wonderful and new. It breaks from the confines of the cocoon, drags it's unfamiliar damp wings into the sunshine and spends some time blinking in the rays, stretching and warming itself.

And when the time is it right, that beautiful creature takes to the sky in a flash of brilliance and a flutter of colour. There is not one cell of it that still thinks it is a caterpillar, there is no self doubt, only joy. The metamorphosis is complete, a testament to courage and self belief which survives the times of hiding away in the scary soup of the self.