After so much planning and nerves a wobbling it happened ... and here it was ...

After an early rise on a gloriously sunny Saturday I drove off in my car, laden to the hilt, to pick up two more gorgeous goddesses and trek across the forest. At the hall we met with another beauty and set to work. We created with cushions and rugs, bunting and hangings, tablecloths and joss sticks, flowers and posters. We put up the screen and set out the stalls. We laid out the altar and we dedicated the space. Then we opened the doors ... to the Wonderful Women's Day. 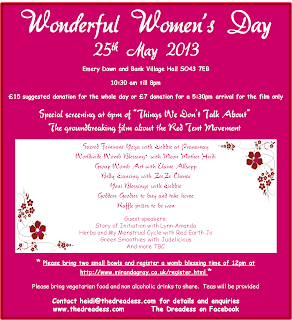 Then the Wonderful Women arrived with smiles and hugs. After dipping into a rather impressive array of herbal teas, we opened circle and began our wonderful day. Debbie guided us through gentle yoga, stretching and breathing to connect with our womb centres and powerful mudras to feel the energy of each chakra. After half an hour we were ready to receive the energies of the Worldwide Womb Blessing. 2012 was the year of initiation, our Maiden year, the start of the awakening of the Divine Feminine in the hearts and minds of women. This year we moved overall in to the Mother energies. As we move through the year the dynamic energies of the Maiden archetype were strongest in the springtime and now at this blessing we moved into this year's Mother phase with the Moon softening into it's nurturing and growing time, helping us to blossom. So for us all during this particular blessing, the extra strength of the mothering energy combined with a super moon and an eclipse were truly felt. We beamed afterwards. 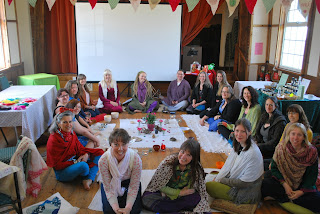 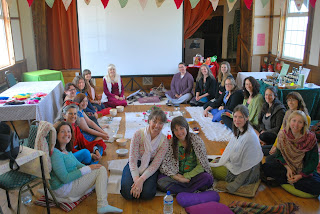 The alter was adorned with pink flowers and green crystals, to keep in with the decor theme, representing the energies of the heart chakra. Following the Womb Blessing I moved it to a smaller shrine. 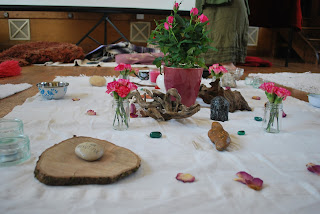 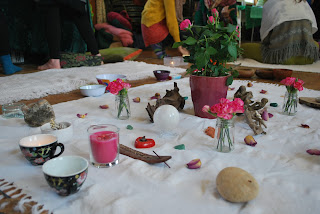 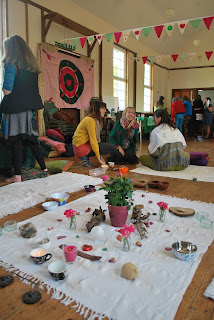 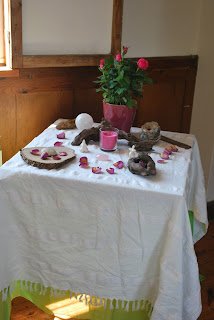 After the blessing we grounded ourselves with mudras and song. Then we nourished our bodies with an amazing, shared, vegetarian feast. We made the most of the sunshine and chilled in the garden. During the afternoon even more women joined our happy gathering. 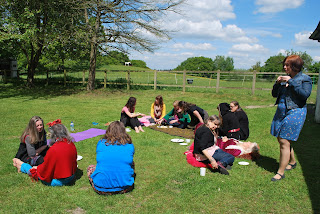 After lunch, Elaine encouraged us to let our creative energies flow, as one, as we made a mixed media representation of the womb. This idea for this was inspired by The Uterus Flag Project. It evolved, in the midst of much laughter and giggles, from a plain canvas with a basic outline, to a powerful and bright cosmic womb. 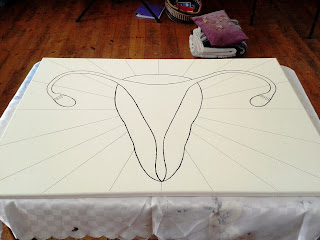 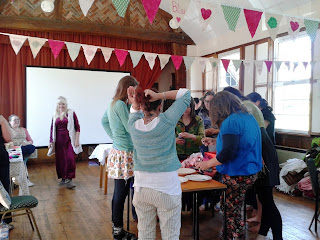 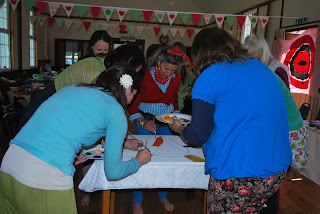 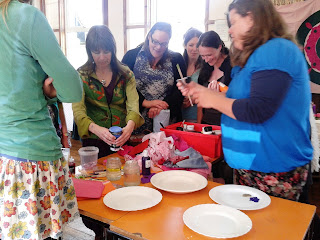 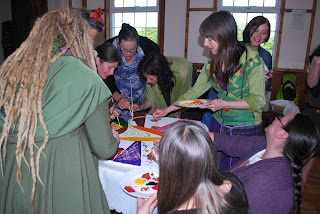 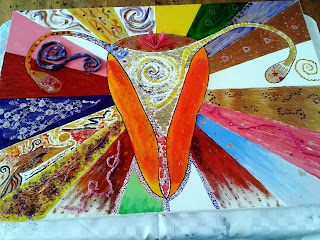 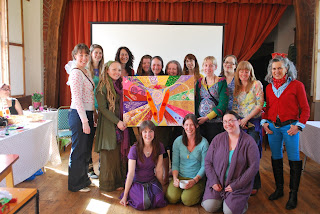 After the excitement of the art session we relaxed with a story in the cosy stage space. In the low lighting , on chairs rugs and cushions we were treated to a tale of initiation, a story from long ago of a girl's first bleeding, with Lynn-Amanda. Some were deeply moved by this tale and I think some of us realised how much we are missing from our culture today. After this we were treated to a green smoothie demo and taster by Jude. She had thoughtfully brought along some super herbs such as shatavari, maca and ashoka, all chosen specifically to support a woman's endocrine and immune system. Along with the green smoothie we were treated to raw chocolate brownies, with cashew cream, and raw chocolate orange cheesecake. Look how pretty the cheesecake was, real goddess food. As you can see from the pictures we all got a bit giddy on these wonderful high vibrational foods. 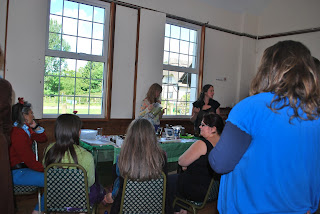 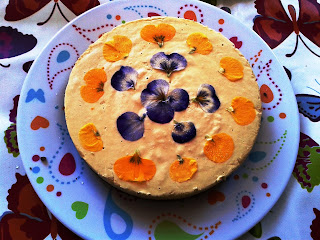 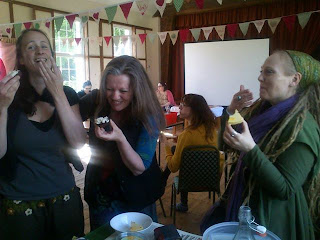 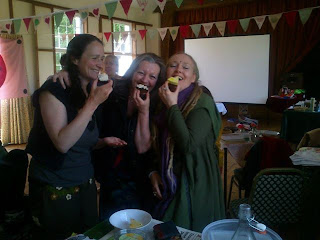 Then out into the garden and afternoon sun to listen to Jo teach us about herbs useful to balancing and coping with some of the extremes of the menstrual cycle. Then ZeeZe treated us to a mini belly dancing workshop and a performance. She whirled around so fast during her sensual veil dance that I couldn't get her in focus. 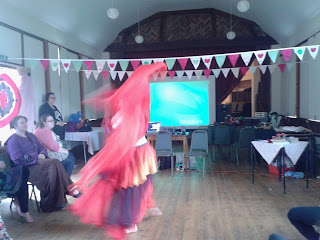 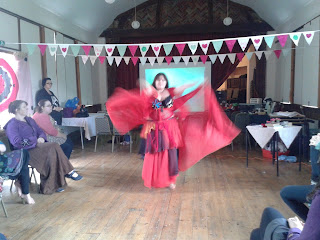 After the shimmying and the shaking we got cosy with more nibbles for our movie, The Things We Don't Talk About. This film, about the Red Tent Movement, touched us all deeply and I don't think there was one of us that didn't shed a tear or three. We women so need to get together and share our stories, support each other and inspire each other. The reaction to this film made me even more determined to carry on creating events for women to just be with each other. 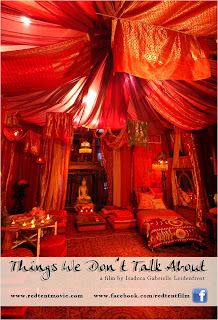 The finale to the evening was the raffle draw. We raised a wonderful £174.92 for the Rainbow Goddess Temple, a new project in the New Forest to establish a permanent sacred space for women. I will write a separate blog about this in the coming days. The raffle prize table was packed with goddess goodies, books, candle, treatment vouchers, goddess dolls, perfumed oil and luxury creams, all kindly donated to help raise the much need funds. 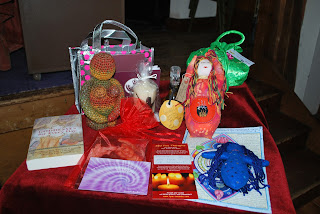 A wonderful day indeed. Tired and happy, as friends old and brand new, we joined hands and closed our circle. We acknowledged our gifts and our strengths, we soaked up the love and honouring, then we Wonderful Women went home our separate ways under the rising Full Moon.

An almighty, love filled thank you to the Moon Mother of us all Miranda Gray for her hard work, dedication and service in the Worldwide Womb Blessing, to Isadora Gabrielle Leidenfrost, PhD for the deeply moving and inspiring Red Tent Movie, to dear Debbie at Pranamay, amazing Elaine, the Wytch in the Woods at Elaine Allsopp Art, Samantha Yoga Fairy at Sew Much 2 C, Cat at Chaoticat, Red Earth Jo, Lynn-Amanda at Soul Fire Therapies, Jude at Judelicious, Sharon Collis, Sarah Phoenix, Irina at Yummy Makes, Marion at the Feel Good Factory, ZeeZe Chenai at Zee'z Events, Nicola Spiral, Fran and Jenny at Weird and wonderful world of Jen, Carla and Katrina for your help on the day and the raffle donations. Also a big thank you to Richard, Mike, Simon and Cayo for your support and technical help.
Posted by Heidi Wyldewood at 19:15 No comments:

I found this poem today. I so needed to find this poem today. This wonderful poem by Marge Piercy. This poem sung to my soul and galvanised my thighs. The last few weeks have been full of set backs and knock backs, wobbles and horribles. I find myself daunted often with the task I have set my self and the path that chose me. I am one of those that "goes on shoveling with tears in her nose" ... but at least I'm still shovelling, even though it does feel like I'm "determined to do something others are determined not be done". That's how things change and not stay the same ... with the scars and the shovelling, along with my SiStars with their scars and their shovelling. I've been chatting to a few of those SiStars this past week, those whose path is similar to mine and they are also finding it very tough out there. We talk, we share, we are in this together. There is unity. A growing oneness. A sisterhood. Strong and vibrant, propping each other up through our worries, easing the fears and pouring the balm of love on the isolation. We are no longer "strongly afraid" ... we are just strong. We may have salty tears on our beautiful muddy faces, but we are damn strong. I'm so proud of us ... so proud of all strong women everywhere. So glad you are all there making me strong. 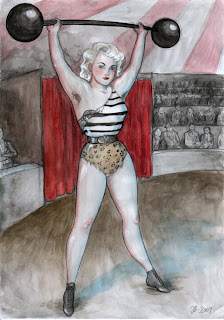 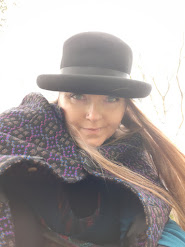