Cultural appropriation is huge in fashion, in movies, in media ... and guess what in spirituality too.  This spiritual theft of identity and meaning, began as a rediscovery by younger generations, born from mostly white invaders, of what they had lost from their own culture.  These seekers for something deeper, severed from their ancestral roots and subtle connection to that land of familial origin, found what they were looking for via the indigenous spiritual practices.  This awakening led to wave of "new spirituality" and a host of new spiritual teachers.  This is the bit that is very difficult to navigate.

It is one that I have had to feel my way through in to what feels right to me also.  I have had the benefit of being taught some of the ways of the Native American and Inkan spiritual practices.  I am a qualified yoga teacher and have delved into the philosophy of of the East.  I have lapped up many a book on Toltec teachings.  I have been researching women's spiritual practices and goddess traditions from more than twenty years.  I have done my fair share of  cultural and spiritual magpie-ing. But ...

It taught me one beautiful thing.  The interwoven and connectedness of all teachings.  They may differ vastly, but the core is so similar.  And they all show  a few key things.  Like how to be connected strongly to the land beneath your feet; how to walk between the worlds and energetic realms; how to understand the subtle anatomy of your own human form; and how to make whole. It was an eye opening joy to find womb wisdom traditions in both South and North America, Asia, China, Europe and Australia. 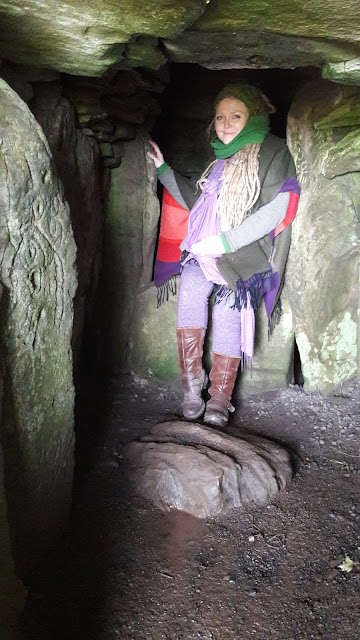 Without these practices I would not have been able to heal and I am forever grateful and respectful.  Without these teachings, I would not over the many years have been able to overlay, or maybe underlay is better, my ever growing knowledge of Celtic ways with the deeper understanding.  These practices of other peoples and places showed me how to connect so strongly to the land around me and to trust that the land will teach me the way.  It is because of my learning derived elsewhere that I have had major lightbulb moments about Western Mysticism and Druidry.  It is because of the richness of all these teachings that I now find myself uncovering lost ancient wisdoms from my own culture and channelling old, or perhaps new takes on old, ones.  I am eternally thankful to other cultures for showing me how to glimpse behind the scenes, opening my doors of perception wide. But it is the truth that I have not had one indigenous teacher of these other ways.  White folks like me who found what they were seeking in a land other than their own, most were taught in that other land itself.  My teachers were genuine, passionate and authentic.

We live in a world where it is easy to be enriched by other places and other cultures.  We eat gorgeous foods from all over the world.  I have clothes brought back from other more exotic climes by friends on their travels. Here is the thing though, whilst I love my jewel like harem pants in the heights of summer, I am very aware that they do not fit my landscape or my climate.  They are not born of this place, they are born of another place and I love them for that.  It is the same with foods.  I have an organic veggie box delivered and mostly the food is local and in season.  Occasionally a mango or pineapple will find its way in there too, but it has shown me what really is of my time and place food wise.  There is definitely a seemingly endless winter of cabbage, and a neverending season of apples, and other things have their moment.  The sprinkling of other foods from other places enriches and wows me.

For me it is the same with spirituality.  Other times and other places have added to my understanding of my time and my place. The best practices for the people of a land are the ways taught by the land herself, but if you have lost how to listen, maybe sometimes you do need to go somewhere else to learn.  I do know however that there is a rich ancient wisdom tradition here the British Isles and that the land that made me is magical.  It is all to easy to search in greener grass when what you are looking for is right beneath your feet, but not so exotic sounding.  It is my belief that overall the best spiritual diet as it were, is that which the land feeds you, with a dash of elsewhere.

For those born to a land that in truth is not culturally their own, what to do.  Third and fourth generation Muslims and Hindus living here in the UK, still often practice their religion, but are culturally very different from their grandparents, adapting and growing up in a different world.  For white people born in the Americas, culturally their more recent family ancestry probably comes from a Christian background, which if you are seeking a more nature based spiritual practice, where do you turn?  To the old Celtic ways, which are now twice removed from you or the practices that emanate from the land in which you  live and were born in?  Or do you find a way made from both.  I don't know.  All I know, it is a minefield which needs diligent and sensitive walking.  To borrow or learn from another culture without respect, oozing out of sense of entitlement and white privilege is just morally wrong. Healers have walked the earth though, for thousands of years, learning new plant medicines and energetic techniques from each other on their travels.  We now use Chinese and Ayurvedic medicines alongside our Western methods.  Where do we draw the line on sharing wisdoms and actual appropriation?  I'm still learning where the line is, it keeps changing, and I am only on the outside looking in. I have to take my cues from those who feel their traditions and identities have been somewhat stolen.  We have to give credit where credit is due.  Yet all the teachings were originally, even thousands of years ago, given to wise, sensitive men and women, with ears, eyes and hearts open enough to listen, see and feel, by the Earth Herself.  They are teachings of Land, Sea and Sky.  They are truths wound into the fabric of Matter and emanate from Spirit.  The ways to connect to those truths are what defines a people and culture I guess.  Those are the methods which get carefully handed down, and feel so very personal and specific to a way of life, a tribe or a family.  This is the stuff of soul, and when the land and the ways are taken, then the crime is immeasurable.

As for the label shaman, my personal jury is out.  Shaman is a word from Siberia,and originally relating to powerful women, so in truth is it odd, and probably offensive, that it is used describe by Westerners, teaching from both the North and South Americas.  Those peoples have their own words for their medicine men and women: elders, naguals and paqos.  Those are words, rich with meaning, honour and respect, that truly belong to a people.  I often think about words from my own culture that fit.  Sorceress, wise woman, holy woman, witch, priestess, magician, walker between the worlds ... believe me, they don't always translate well, because the true meaning is lost here.  That is the sad reality, we have more of an understanding culturally of the foreign terms yogi and shaman, than we do of wisdom tradition terms here.  I get affectionately called head witch and shamanka by some friends.  But I won't be putting the term witch on my bio, because it conjures up ideas of wicca as a religion, rather than its etymology which has roots in power, craft, skill, divination and sorcery. In a desperate attempt to avoid the word "shaman" my current bio reads that I am a ...

" facilitator of healing journeys, mentor, priestess, walker between the worlds and a sacred activist" ... "a keeper and creatrix of wild medicine and womb wisdom traditions, living life from the heart, often with the soles of her bare feet on Mother Earth"

See,what a mouthful and sounds a bit up my own arse, to be honest.  It was easier to use shamanka, but that didn't really do it either. I don't really like the word healer as people think you are a fixer and a repairer, when in fact the root of the word means I help to make whole, even if the whole is still damaged.  The term "wholer" all though it describes some of it perfectly isn't even a word. For some of us who are refinding the threads and walking our old ways from our own European lands it is hard to find the words, it is difficult not to spiritually appropriate a little.  When battling through two thousand years of patriarchy and Christianity trying to find the right words to use, it is a nightmare. Language is fluid and ever evolving.  What was right three millennia ago, is probably not right now.  So maybe we need new terms, and definitely a re-education of old ones.  But till then I can't see me putting sorceress on my business cards. "Priestessy, healer type, magical,wise woman" is probably about as close as it gets, even if I do say so myself.

Heidi x
Posted by Heidi Wyldewood at 02:55 No comments: