We move ever closer to "sexy witch" time of year. See me roll  my eyes; gesticulate dramatically in a two-handed facepalm; and then see my cross witch face as I get out my waggy telling off finger and point in the general direction of countless seasonal aisles across the country, and at potential Halloween party goers and parents of mini trick-or-treaters.

There is a whole lot of wrong with the"sexy witch" Halloween costume. Not least cos a lot of it seems to be aimed at a rather underage market. Why are you trying to make your nine year old a sexy anything? And why are all the commercial Halloween outfits always a "sexy something" for the women and femmes. Jeez. Can we move past sexual objectification of women already?

Witches are currently portrayed in two ways. One as the ugly old hag, crooked nose, warts, probably evil as fuck, and a bad thing. That trope has been around for over a couple of hundred years now. It says witches are bad. Being old is bad. Straying from the socially acceptable norms of appearance is bad. Magick is bad. The old ways are bad. Bad. Bad. Bad. Witches. Not a good thing. And then there was a kind of reinvention, a reclamation of sorts, of the witch. In 1964 Samantha t-witched her pretty little nose, Morticia flirted darkly with Gomez, and hey presto, the witch was back, but only the sexy version: the tempting scorceress or the cutesy, ever-so-husband-helpy housewife. Not abracadabra, the witch is back in her personal power just for herself. Nope. Only if she appealed to men and they could imagine her in their beds. And there we have stayed. Old witch or sexy witch.

And in those two popular media portrayals we have that old patriarchal bullshit of "old wise women are bad, sexy young available women are good" .  Women's power and wisdom once again sidelined and dumbed down to black attire fit for a kinky bedroom session.

Here's the undumbed down truth. Being a witch is a way of life. Once, it was a way of life, a beingness that got you killed. In some places it still does. Here in the UK around five hundred were hanged for witchcraft during the dark times, and in Western Europe around two hundred thousand hanged or burned. Elsewhere, the number of false trials, torture and death toll mounts up further. That wound and trauma imprint still resides within the familial and cultural psyche. Having stood on several witch hanging spots, I can tell you it sits heavy in the landscape too. The shame of the wise women still makes it hard for certain people to walk their truth tall and proud, stepping out of the shadows and not hiding their shine. The fear may seem irrational, but having seen many women, and experienced it myself, sense the noose tight, the knot at the back of neck, the choking, and the subsequent clearing of the throat, during certain energy work or ceremony, I can tell you that  fear is still there in our national psyche. It's going though. Many of us work to clear it from land and place and person. There is nothing sexy about a hanging, innocent , terrified woman. 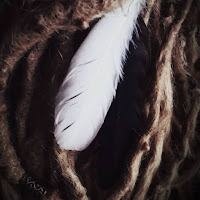 The other truth is that witches are not a thing of the past. The witch exists now. Some are old. Some are sexy. Some are old and sexy. Some are young. Some are middle aged. But honestly you are more likely to be stood next to one in the supermarket queue and not know. The ordinary witch. How the hell do you dress up as that? I can tell you now the last thing you are wearing when gathering herbs or the morning dew is a skimpy bit of black lace and a pvc bra. High heeled black boots and a crushed velvet cape is also a fairly useless look when stood out in the pissing rain in the middle of the heath on a barrow at midnight chatting with the old ones. Most witches don't dress up. They just put on clothes. Sometimes we have fancy shmancy ones for special days, and they may or may not be little black dresses made of shimmer and see-through, but on the whole not so much. Sometimes we do have pretty wowy ceremonial clothes, but there is too much playing at being a witch out there, full stop. Not just this time of year. The social media culture of sexy witch ignores much of this real chosen path. The ones who hone their craft. The ones who know the true meaning of "spelling". The ones who cut their herbs with moon. The ones who reassure the ailing. The ones that sit as hearths at the centre of community. The ones that go unseen in landwork and sacred activism. Some are even working polarity sex magic, which honestly is full of fucking shadow work and horrid self realisation, and often rather the opposite of sexy. 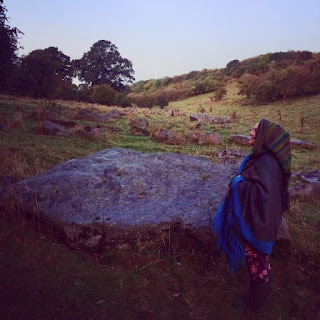 Go buy your Halloween outfit. Dress up. But pay mind to the witch. Hold all this in your heart and honour the life and the source of your costume. Read up a little for yourselves on that you wish to be for one night of the year. Tell your daughters and sons that witches are real. That you may even know one and not know it. Tell them that witches are wise women, healers, valuable assets to community, wayshowers, wisdom keepers, land protectors, sacred activists, and have probably fought frontline for some of the rights you now have. Tell them also, not all witches are women.

Just remember that your dress up may borderline on badly stereotyping a well loved life path and a spiritual belief system for many. Bring honour and truth into your costume. Wear us well. Go be a sexy witch if you must. Or take inspiration from a recent picture of me out on a pre-sunrise walk, looking rather fetching in a blanket, wellies and pyjamas. Nah, go and look fabulous. Feel magickal. Go and step into power. Just watch your witchin'.